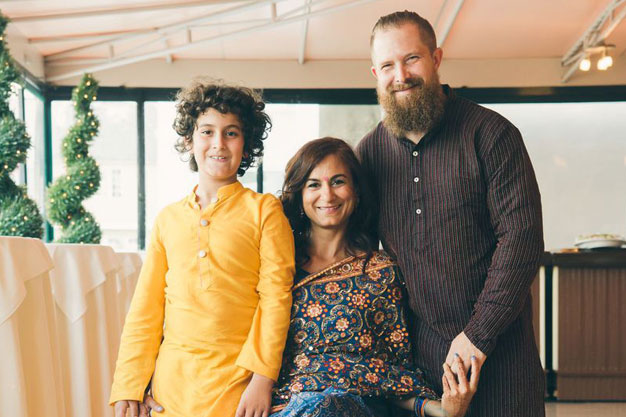 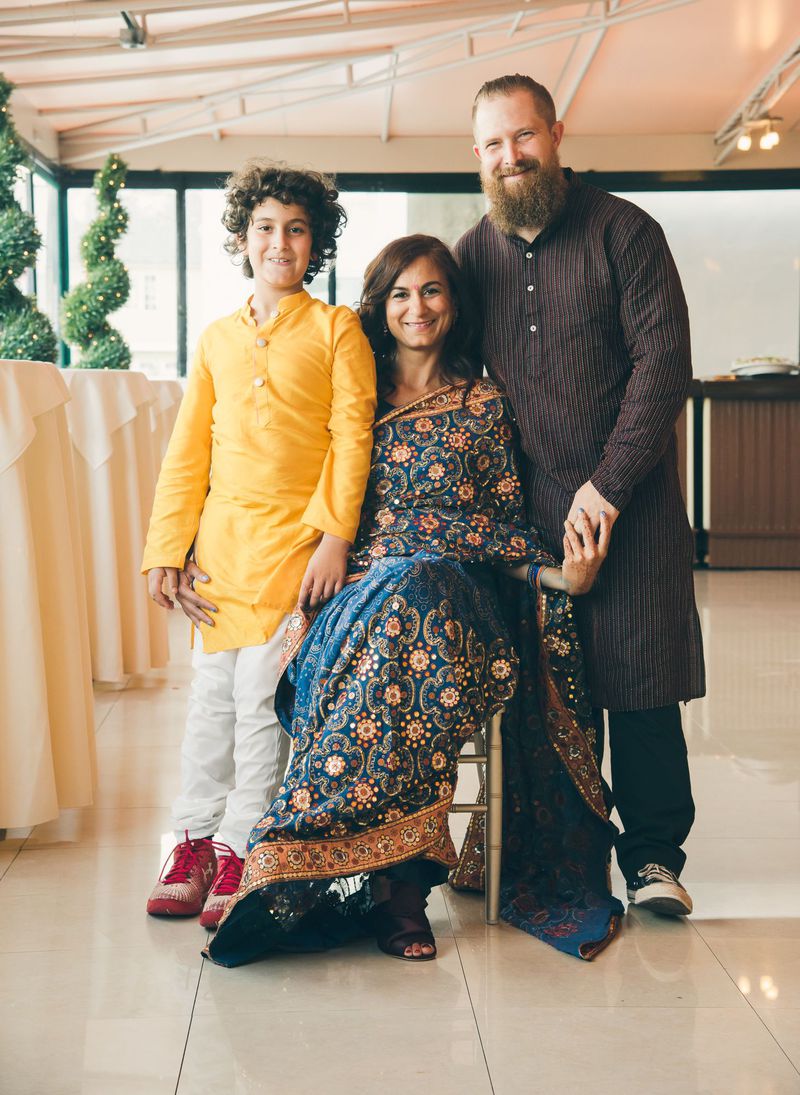 Pratigya Kalani was in Dubai and Donald Kaufman was in Houston, when they met in an internet chat room in February 2005.

“Are you a cowboy?” Prati asked Don in the Texas chat room.

“You’re in the wrong place looking for a cowboy because they’re all out in the field,” Don said, “but, I can be your cowboy.”

Don recalls that he was “a young buck” and just 22. “I was in Houston between government security contracts overseas in the war zone. I had been to Afghanistan,” and was heading back.

Prati liked Don’s sense of humor, but wanting proof that he was a real person, she asked him to call her.

“I called her right up,” Don says. He was billed $100 for their 15-minute conversation.

“He was really genuine. He was interesting to talk to,” Prati says. Curious about each other’s lives, they continued sending each other messages. “I was not expecting anything,” says Prati, who was 27 at the time.

When Don returned to Afghanistan, he racked up $800-$900 phone bills calling Prati. After eight months in Afghanistan, Don was due for a break to go home. His flight home was connecting through Dubai, but when his reservations were cancelled four times, Prati suggested he take his vacation in Dubai.

“I looked at him and thought, ‘Oh, my God! He’s so American. He was wearing sweatpants and a tight tee-shirt,” Prati says. “I was used to these guys who dress up … who were tall, model-looking, always older. Here he was so casual. I wasn’t used to it.”

Prati was babysitting for a teenager, whom she was taking to a concert the day Don arrived. “What impressed me at the concert was he paid for all my friends.”

For Don, it was just “Texas culture, Texas hospitality.”

When Prati came home from work the next day, “My house was spotless. He cleaned everything.” The following day, Don proposed. “I was in shock … Give me a day or two to think about it,” she said.

Don admits it was “pretty unconventional,” since he didn’t have an engagement ring. “She was everything and more than I expected.”

For Prati, marriage to Don was even more unconventional.

“I never thought I’d ever marry him … I grew up believing he shouldn’t be younger. You never married outside of your community. That’s what’s expected,” says Prati, who grew up in Beawar, in northwest India, and was working in marketing in Dubai. When Don proposed, “My plan was to say yes after I told my parents,” Prati says. “My father was sick at that time,” and she called her older sister first.”

Prati’s sister told her parents, and her father said, “Thank goodness she’s settling down.” Prati said ‘yes’ to Don, a week after they met. That day they bought rings, and Don took her to a restaurant where he knelt down on one knee and gave her the ring.

Their joy was quashed a few days later while they waited for their flight to India to meet Prati’s family. “Don’t come. Don’t bring him,” her sister said in a phone call.

“I knew right away. My father had died,” Prati says. She flew home and Don went back to Afghanistan until December. They spent New Year’s Eve in Dubai and flew to India to tour the country. On Jan. 30, 2006, “We did a very simple court marriage because my father had just died.” Only her sister’s family and a friend attended. “My mother was in mourning for a year,” and her younger brother was home with her.

Prati and Don celebrated with a honeymoon in Nepal and the Taj Mahal, and in March, after meeting Prati’s mother and her family, Don returned to Texas to apply for Prati’s visa and to figure out “what next,” in his life. “I tried to join the military, but I was in a severe car accident” in high school, which prevented him from enlisting. In 2006, he applied again and was accepted into the U.S. Navy.

When Prati’s visa arrived in late July, Don was in training in Chicago. “It was tough,” Prati says. “Here, I’m married to their son. … I was vegetarian,” and didn’t know their customs while living with them for two months. In October the newlyweds drove to Groton, Conn., for Don’s first assignment. Prati worked for Pfizer until December 2009, when Don was heading on assignment to Cuba. She was pregnant and went home to India. A week after their son Cayden was born, Don was given permission to go see him.

At three months, Prati brought Cayden to Houston to meet Don’s family. She and Don bought a house there, but she soon put it up for rent. For three years, “All I did was travel with two bags and a kid,” staying with friends closest to where Don worked in order to get together easier. When Don left the Navy, he worked in security again in Mexico and Israel.

Prati returned to New London for Cayden to start nursery school, and when Don finished his contract work, he stayed home with Cayden while she commuted to Bloomfield to work in marketing at Cigna. They moved to West Hartford in 2013, and in 2014 Don enrolled in a two-year program in Houston to become an automotive technician. He now works for Audi in East Hartford and says, “I love it.”

Prati studied to become a yoga instructor in India and teaches at New York Sports Club and Anytime Fitness in West Hartford. She recently left Cigna to start her own marketing consulting business aimed at entrepreneurs. “I lived my life the way it is because of my mindset. … I did not grow up with a word for obstacles. New situations were viewed as “an opportunity to grow or challenges.”

It is a mindset that helped Prati and Don in the first seven years of their marriage. “I was in culture shock the first year,” Don says. He’d never had Indian food. Prati’s family didn’t speak English. “There were a lot of trials and tribulations working out our cultural differences and learning about each other,” Don says, but, “We’ve grown into who we are now. … We love each other.”

Prati went back to India in December after a four-year absence, but since Prati and Don bought a home in West Hartford in 2017, her family has visited often.

“I try to go home once a year,” Don says. “I’ve got to get my barbecue.” His mother is currently visiting for the month.

Prati and Don schedule dinner dates for “our time together,” and as a family, they go tent camping, to the beach in New London, and to Cayden’s baseball games.

Don remains “very generous and so family oriented,” Prati says. “When I quit my job, he supported me. He’s there. … He’s a Texan at heart. There’s bigness in the way he cooks, the emotions he feels, the way he loves. … He’s a total Texas cowboy.”